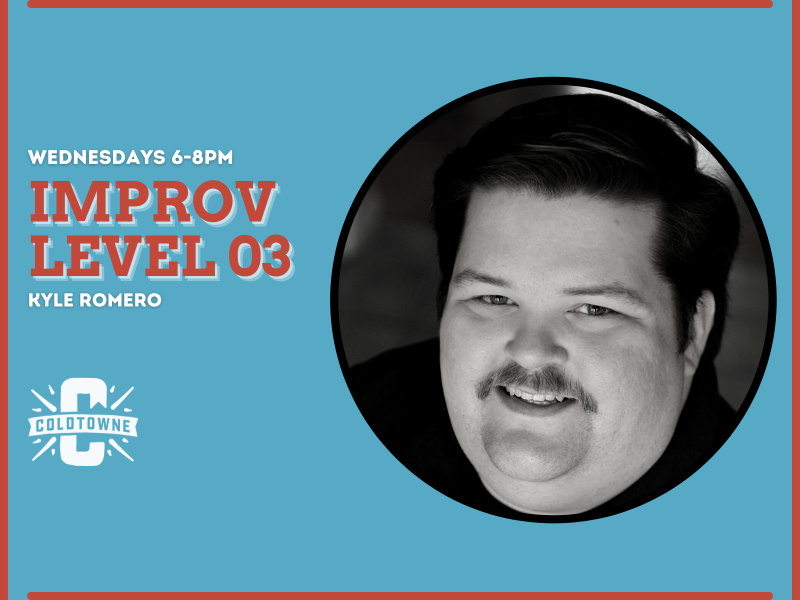 Strong group work, or “group mind,” is the focus of level 3, where students take a deeper look at their scenework and begin to create shows that are more than just a montage of disconnected scenes. While continuing to strengthen and build on the lessons of past levels, various storytelling techniques and other skills are introduced to help students go from improvising a single scene to creating an entire longform improv show. Students practice performing additional “beats” of an original scene to heighten an idea. We teach ways to identify and have fun with the “games of a show” happening between scenes that give each show its shape. In this level students also begin to learn some traditional improv formats that practice useful skills like deconstructing a selected source material (like a true personal story) in order to pull ideas for a scene. This class includes a student performance!

Kyle Romero is a graduate of the conservatory programs of both ColdTowne Theater and the Upright Citizens Brigade Theater in Los Angeles. He holds a degree in Theater from Lamar University in Beaumont, TX. In Austin, he has appeared in several ColdTowne productions, including One Hour Til Air, Game Night, Bigfoot: The Musical, and as a performer in the weekly improv show Stool Pigeon. Kyle is also a member of the sketch comedy collective Pendulum and is a producer for Austin Sketch Fest.